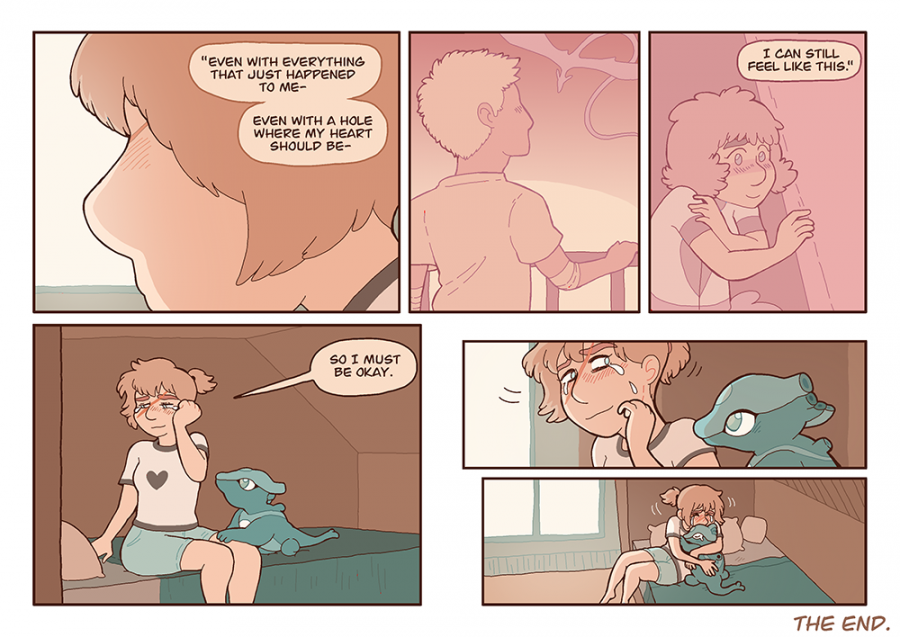 I can't tell you how much sharing this story has meant to me over the past ten years. Thank you, thank you, thank you to every single one of you who was read along with me. Monster Pulse has been an enormous and deeply personal endeavor for me. It's also the most ambitious project I've ever attempted, and I'm proud that I saw it through to the end. When you start writing and drawing a comic in your early 20's and finish in your 30's, of course there are things you look back on and want to change as you've grown as an artist and storyteller. But I am still very proud of Monster Pulse. I love these kids and their intense, complicated, loving relationships with the monsters that come from inside themselves. It's a story that's dear to my heart that I will continue to carry inside me for a long time, even now that it's over.

Well, we're going to print the whole series as books, with help from Hiveworks!

I'm not really happy with the way the first two existing printed volumes of Monster Pulse came out. They're different sizes, and I'm not thrilled with the layouts, and etc etc. The first Kickstarter will be for a new Volume One, which will combine the current existing volumes 1 & 2. (So if you have those books already, you can skip this one if you want). The new Volume One will likely have some remastered art and story stuff from the first six chapters as well. Then, we will continue the series, probably in four large volumes, until it's over. These books will look a lot nicer and be a lot more uniform- like a real unified series of books. I've been working on this series for over ten years, and I wanted to do a printed version right, with all the beauty and professionalism it deserves. I'm still in talks with Hiveworks about the details of this, so you can probably expect that later this year.

As for other comics, I have a new series in the works (also with Hiveworks) called The Golden Boar. That's also set to launch later this year. It will be somewhat more adult than Monster Pulse, and more of a straight-up fantasy work (fans of my game, Rose of Winter, might find the setting familiar). I'm really really excited about this comic, and even though it'll be a little different from Monster Pulse, I think it has some similar themes, and I'm sure you will love it too.

There's some concept art for the comic on my Patreon. You can also follow me on Patreon to read my daily diary comics, which updates twice a month, every month. I do a comic for every day of the year! Don't miss out!

And I have Tiffany's Griffon, my fantasy graphic novel, with my partner/artist Maddi Gonzalez, coming out from First Second in a year or two. We're hard at work on the book and it's going to be great!

And I have one or two more projects in the works that I can't announce yet, but suffice to say I've been busy putting together lots of projects now that Monster Pulse is done. I'm really looking forward to sharing it with you all.

If you want to keep up with what I'm up to- Twitter is still the best way to get updates and keep up with my new projects. But I will post updates here on Monster Pulse when new comics or Kickstarters are happening.

Thanks to Yuko, Ananth, Jones, Coz, Der-shing, Mary, Toby, Aatmaja, Victoria, Beetle, my agent Susan, the good folks at Hiveworks, and all of you wonderful readers for loving and supporting me as I made Monster Pulse.

Thanks especially to Hanni for her amazing support and contributions to the comic (like the Sugar Crash side story) and Suzanne for her incredible design of Monster Lulenski, which really made the last part of the comic amazing and special.

And especially thanks to my husband Tom, without whom Monster Pulse would not exist. I love you more than I could ever say.